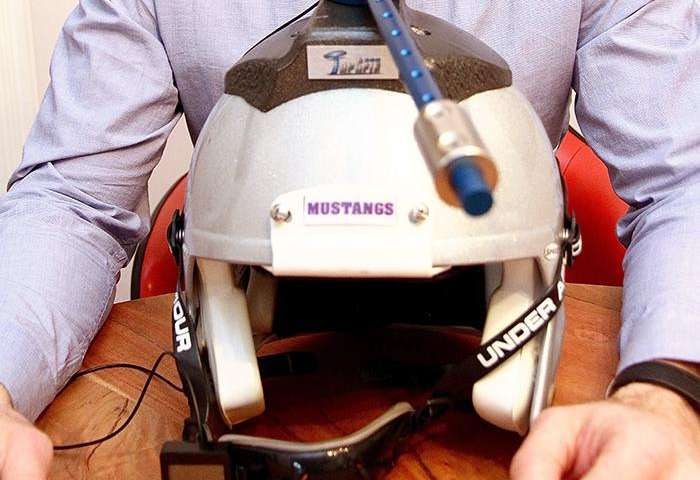 Some of the best ideas come from drinks at a bar with friends. Theo Versteegh’s revolutionary idea to mitigate concussion in sport was no different.  Almost five years ago, around the time famed hockey player Sidney Crosby suffered his second career-altering concussion, Versteegh, BSc’98, MSc’10, PhD’16, was at a bar with friends, watching the game on television when Crosby suffered the blow.

“They were showing the hit on repeat. As a physiotherapist, I thought if his neck was stronger, he wouldn’t have had such a violent hit and ultimately, wouldn’t have been out as long as he was,” Versteegh said.

“It’s not just about neck strength. You still have to train the neck muscles‘ responsiveness.”

Soon afterward, the idea for TopSpin 360 was born.

TopSpin 360 is a weighted football helmet used to strengthen the neck of players.

Using a small weight attached to a rod, extended from the top of the helmet, athletes roll their heads to spin the weight around the whole head. The faster the weight spins, the more centrifugal force is generated, and the stronger the neck muscles get. The device allows for full mobility of the neck, as opposed to the traditional single-directional training currently used.

As a former Mustangs football player, Versteegh hopes this device will be incorporated into weight rooms across all sports, thus protecting athletes from concussions.

“It was a matter of developing a method of strengthening the neck that taught the muscles to absorb a blow and also to react quickly, to kick in. You can have the strongest neck in the world, but if you don’t contract when you get hit in the head, you’re still going to get concussed and have your head flop around,” Versteegh said.

From a physiotherapy perspective, Versteegh was confident he knew how to strengthen the neck. But he wanted to put some time and effort into exploring the market.

“I didn’t want to just release another gimmick,” he said.

He found nothing that took the approach he had in mind.

“The amount of work that was going to go into proving this idea would work would be quite onerous. It would be a good opportunity to turn it into a PhD,” Versteegh said. “At the end of the day, if I proved it didn’t work, then it wouldn’t be all for naught. I’d have a PhD at the end.”

Next, he connected with Western Mustangs head football coach Greg Marshall to start a pilot project. Having played football as an undergraduate student, Versteegh knew the risk of concussion in football intimately.

“He (Marshall) was on board for anything that would decrease the risk of concussions. He was quite helpful in setting up the initial pilot study,” Versteegh said.

The study involved training eight players, chosen for their high risk of concussion, on the TopSpin 360 for the summer prior to the 2014 season. They were then compared to a group of players who trained using traditional methods.

The first prototype looked like “a bit of a dog’s breakfast,” Versteegh laughed. “But fortunately it worked, which is the key.”

With some finessing, Versteegh designed a more functional ‘to market’ prototype to be sold.

The Western football team purchased nine units and used them this past summer for pre-season training. Versteegh noticed significant improvements in player performance on the device over the summer.

“Right now, we are flying a bit under the radar because we want to do this properly.”

Currently, Versteegh is in negotiations with the Mayo Clinic and the University of North Carolina for studying the device. Both institutions have a sport concussion research group and are interested in exploring devices designed to prevent concussions.

Versteegh stressed the importance of a strength and conditioning coach, or an athletic trainer, administering the device. It will not be available to the general public anytime soon.

“The last thing we want is a hockey mom or dad buying this for their child and saying, ‘You’ve got a big game tomorrow; you better train on your TopSpin 360’ and they train really hard the night before. They will actually be more prone to injury because they have fatigued out all of the muscles. Proper amount of rest between the use of it is key.”

TopSpin 360 has not been a solo effort.

Versteegh credited TechAlliance of Southwestern Ontario, a regional innovation centre based in Western Research Parks, with pointing him in the right direction, from accessing government funding to business support for startup businesses to suggesting they enter the Synapse Life Sciences Competition in Hamilton last year. TopSpin 360 won that competition.

Through the Ontario Centres of Excellence, TopSpin 360 garnered SmartStart funding which provided capital to further develop the business.

And then there are his connections to Western.

“While attending Western, I was fortunate to be accepted in the Collaborative Training Program in Musculoskeletal Health Research,” Versteegh stressed. “This provided a deeper look and understanding of the many facets of conducting musculoskeletal research. It also provided access to lectures of distinguished researchers when they came through Western.”

Versteegh is creating version 2.0. The next version will be Bluetooth enabled and sync to a smart phone to record training and performance.

“What I learned most from doing my PhD is I’ve become much better at the skill of how to learn. The things I’m learning, in order to create the device that I want, are completely outside of my skill set or scope of anything I’ve ever done. I’ve given myself a crash course in electronic and computer programing,” Versteegh laughed.

“I just want to do what I can to protect the sports that I love. Yes, concussions are scary. But hopefully, with something like this, we can at least screen for personal concussion risk and give a means to decrease that risk.”