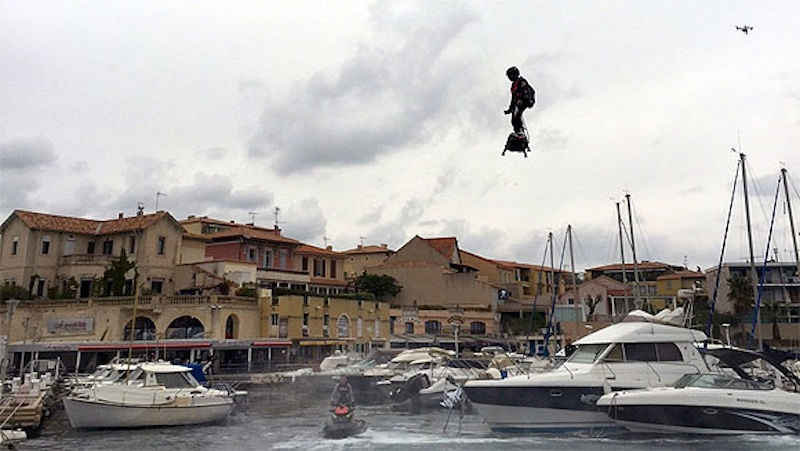 Franky Zapata flew a hoverboard 7,388 feet (2,252 meters) from a height of 164 feet (50 m), according to Guinness World Records. The daredevil set the new record on the Flyboard Air, a futuristic craft developed by his company, Zapata Racing.

The hoverboard is essentially a flying skateboard, similar to the one that Marty McFly famously rode in the 1989 classic movie “Back to the Future Part II.” Though the board from that film was only a piece of movie magic, a number of functional prototypes have been introduced in recent years.

Zapata’s record-breaking flight, which flew more than eight times the distance of Duru’s, was staged off the coast of Sausset-les-Pins, in the south of France, on April 30. Followed by a fleet of boats and jet skis, Zapata can be seen piloting his Flyboard Air over the water in a video of the event that Zapata Racing shared recently.

On site to confirm the record-setting distance, Guinness World Records adjudicator Sofia Grenache said in the video that the flight as “a phenomenal sight to see.”

Prior to the Guinness World Record attempt, Zapata Racing had shared footage from a test flight of the Flyboard Air that went viral. The company has developed a range of other devices, including the original Flyboard, which connects to a watercraft turbine via a long hose. In comparison, the Flyboard Air is powered by an “Independent Propulsion Unit” to fly hose-free for up to 10 minutes, according to Zapata Racing. The company also claims that the hoverboard can reach a height of 10,000 feet (3,048 m), with a maximum speed of 93 miles per hour (150 km/h).

The Flyboard Air’s technology took four years to develop, reported The Verge. The board has four 250-horsepower turbo engines, fueled by Jet A1 kerosene carried in a tank strapped to its rider’s back. There are also two engines for stabilization on each side of the board.

“It’s extremely hard to stabilize … it’s not only my balance,” Zapata told The Verge. “For example, we use, like, the same kind of electronics like you use on a drone to stabilize. The problem is to create the algorithms, the right algorithms, to combine the intelligence in the board and in your brain.”