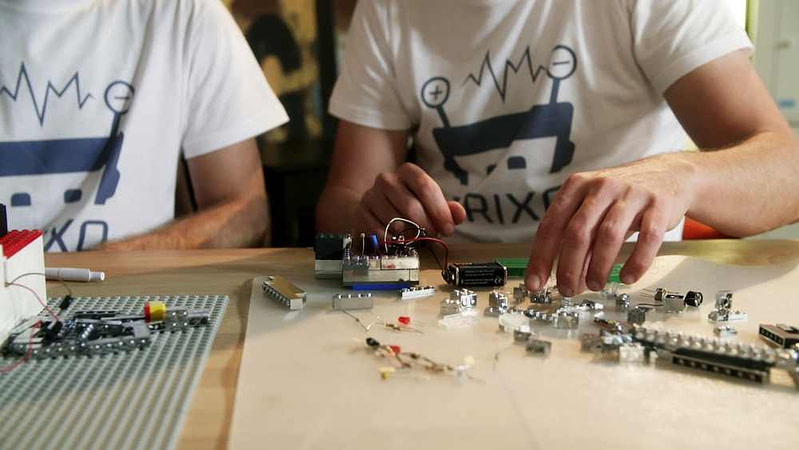 The new devices, from Israel-based Brixo Smart Toys, use chrome-plated blocks that conduct electricity to connect batteries with electronics. The blocks are safe to hold, just as regular batteries are, the researchers said.

“The human body resists electrical currents from passing though it — it has a high electrical resistance,” said Brixo founder Boaz Almog, a quantum physicist at Tel Aviv University. “At low voltages — less than 15 volts — almost no current enters the human body upon contact, and hence no harm is done.”

There are currently four kinds of electric blocks. In addition to the chrome-plated connector blocks, the researchers developed another that can hold a regular 9-volt battery, constantly monitor electric current to prevent short circuits, and conserve power when creations are idle in order to extend battery life.

Others, dubbed “action blocks,” may contain motors to move creations or LEDs that can light up Lego designs. So-called “trigger blocks” contain sound, light and proximity sensors to help creations respond to their surroundings, and they can also grant creations wireless connectivity via Bluetooth, the researchers said.

In combination with Lego Technic sets — which include wheels, rods and other complex parts — machines such as cranes and Ferris wheels can be created. Moreover, wireless connectivity allows people to control their creations via their smartphones or even remotely and automatically through the internet, the researchers said. For instance, it could be possible to turn on all of the smart home devices in your home simply by hanging a key chain with a Brixo block on a Brixo board by the door.

“Brixo will allow makers to build internet-of-things devices with a minimal learning curve and with maximal flexibility mechanically and electronically,” Almog said.

Almog came up with the idea for these electric bricks in 2013. His son had successfully wired an electric science kit and proudly showed it to Almog, but when Almog asked his son where the circuit was, he realized his son could not see it through the forest of tangled wires. His son then went to play with his favorite toys, Legos, and the idea for Brixo was born.

“Brixo is all about building circuits, and seeing and understanding what you built,” Almog said.

A Kickstarter campaign to fund Brixo raised $716,791 from 6,171 backers by the time it finished on May 11, far outpacing its original goal of raising $50,000. The company plans to ship its products to customers starting this fall.

“Brixo will come out of the box with building instructions and suggestions for basic models — for example, car, helicopter, alarm clock,” Almog said.

Brixo will also host an online community where amateur and professional tinkerers and developers can share building instructions for models and learn how to create new devices. The community will go online later this year, Almog said. “Brixo supports and encourages tweaking and tinkering,” he added.

Future Brixo blocks may include ones that can recognize voices or make sound, Almog said. The company is currently developing an application programming interface (API) — software that allows other programmers to write apps and other programs that can make use of Brixo, Almog said.