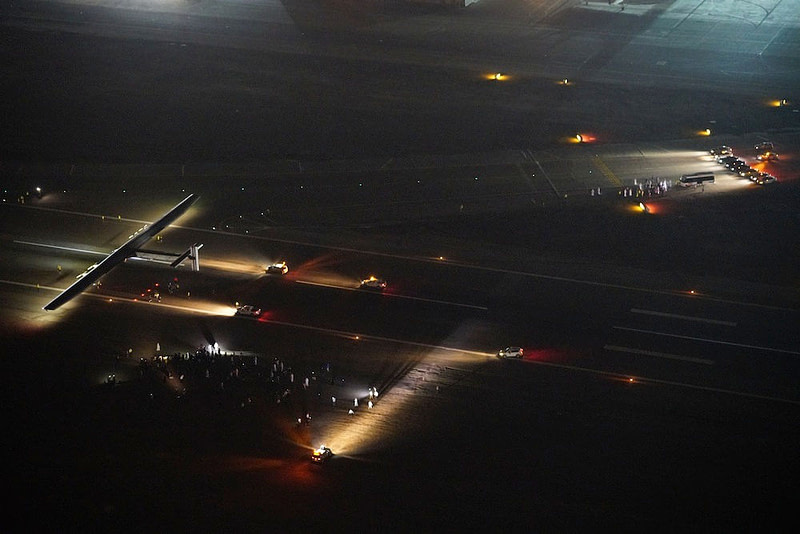 A solar plane powered entirely by the sun has completed a journey around the world, making it the first solar-powered aircraft to circumnavigate the globe without using any fuel.

The Solar Impulse 2 plane landed in Abu Dhabi today (July 26), ending a 17-leg journey that crossed Asia, the Pacific Ocean, the United States, the Atlantic Ocean, the Mediterranean Sea and the Middle East. Pilots Bertrand Piccard and André Borschberg’s ambitious flight began on March 9, 2015, with Borschberg at the controls for the first leg of the expedition. The pilots then took turns in the single-seater cockpit as they traveled around the world, logging a total of 23 days of flight and traveling 26,744 miles (43,041 kilometers).

“This is not only a first in the history of aviation; it’s before all a first in the history of energy,” Piccard said in a statement. “I’m sure that, within 10 years, we’ll see electric airplanes transporting 50 passengers on short- to medium-haul flights. But it’s not enough. The same clean technologies used on Solar Impulse could be implemented on the ground in our daily life to divide by two the [carbon dioxide] emissions in a profitable way.”

Solar Impulse 2 was designed to fly day and night without using any fuel. It is powered entirely by 17,000 solar cells and onboard batteries, which charge during the day to power the plane at night and during cloudy weather.

The flight around the world garnered international attention, and a total of 19 world records were set along the way or are still awaiting confirmation by the World Air Sports Federation. Borschberg achieved the longest-duration solo flight when he flew five consecutive days and nights over the Pacific Ocean from Japan to Hawaii. Piccard became the first to cross the Atlantic Ocean in a solar airplane.

After beginning the journey in Abu Dhabi in March 2015, the plane made stops in India, Myanmar, China and Japan before the record-breaking flight across the Pacific Ocean. In Hawaii, the plane was grounded for nearly a year due to overheated batteries, which caused irreversible damage to the plane.

The journey resumed when Solar Impulse 2 flew from Hawaii to California in April 2016. After it crossed the United States — making stops in Arizona, Oklahoma, Ohio, Pennsylvania and New York — the plane became the first solar-powered aircraft to cross the Atlantic Ocean, flying from New York to Spain in 71 hours and 8 minutes. Earlier this month, the solar-powered airplane flew over the pyramids in Egypt, offering a striking contrast between ancient and futuristic technology.

Borschberg and Piccard aimed for the historic flight to showcase the power of renewable energy sources and to encourage further development of “green” technologies.

“More than a demonstration, it’s the confirmation that these technologies are truly dependable and reliable,” Borschberg said. “There is so much potential for the aeronautical world: While 100-percent-solar-powered airplanes might take longer to materialize, electric airplanes will develop in the near future because of their tremendous advantages, such as energy efficiency.”