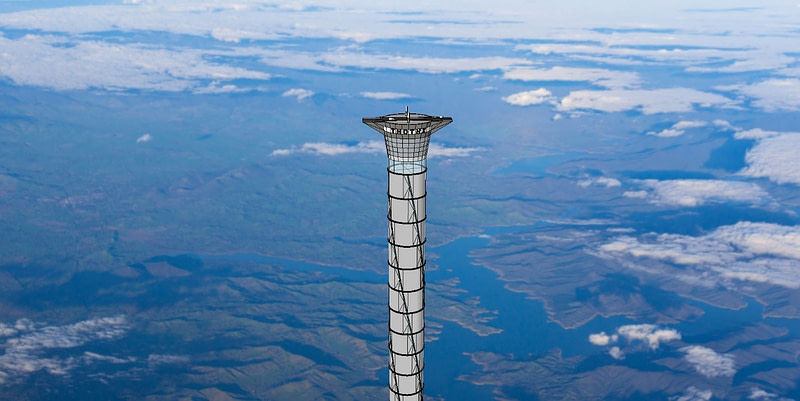 Get ready for an elevator ride to space! Canadian company Thoth Technology Inc., which specializes in products and services for space applications, has been granted a US patent for a space elevator from the United States Patent and Trademark Office.

The self-supporting space elevator tower features elevator cars that can ascend and descend on the outer surface of the core structure or in an interior shaft. The top of the tower, which will be reachable by an electrical elevator, will have decks for launching space planes. In addition, pods will be attached along the length of the tower.

The invention ushers in a new era of space transportation on a planetary surface. According to the space elevator patent application, the huge lift can be used for:

Invented by Dr. Brendan Quine, the freestanding space elevator tower will be constructed from flexible sheet material, with reinforced inflatable sections. It is expected to measure 20 km high and 230 meters in diameter and reach 12.4 miles above the Earth.

Building to just 12.4 miles above Earth means the lift will sit in the stratosphere rather than geostationary orbit, which is about 22,000 miles up. This distance makes it feasible to design an elevator that can support itself.

For you science geeks, the tower will be built just beyond the Armstrong limit, which is the point in altitude that produces atmospheric pressure so low that bodily fluids would boil away without a protective suit.

Rather than supported by cables, the entire length of the pneumatically pressured tower will be divided into pressurized segments containing interior cells to stabilize the core.

The US patent for the elevator to space describes a series of flywheels that will be used to keep the structure fixed in place and to pressurize the tower.

Quine envisions space planes launching into geosynchronous orbit and returning to the elevator tower to refuel. The new way to access space saves 30 percent of the fuel needed to lift a conventional rocket off the ground. Additional savings will be realized since the entire system has completely reusable hardware.

If other companies commit to developing other space transportation vehicles beyond traditional rockets, they also can launch and land from the tower. One example given by Thoth Technology is self-landing rockets.

Thoth Technology is not the first to explore the potential of a space elevator. The concept of a freestanding space tower was first proposed way back in 1895 by Russian rocket scientist Konstantin Tsiolkovsky.

The topic was broached again in 1979 when Arthur C. Clarke wrote about the construction of an orbital tower in his novel, The Fountains of Paradise. More recently, structural engineer Peter Debney of London’s Arup Group proposed a space lift in 2014 that would mimic the design of cathedrals, which control the center of gravity by tapering at the top.

LiftPort Group, based in Seattle, Washington, is also working on a research program that will move cargo from Earth to space using a space elevator. Currently, the group has submitted preliminary design concepts for a lunar elevator that would transport cargo and people to and from the surface of the Moon using a ribbon cable attached to a space station.

More definite plans were announced in 2012 when Obayashi Corp., a construction company in Tokyo, Japan, said it would build a space elevator that will reach a quarter of the way to the moon by 2050.